New brickworks triples production of the world's most expensive brick

Petersen Tegl cannot keep up with the demand for the world's most expensive brick. Therefore, they have invested in a new brickworks facility, enabling them to produce three times as many of the hand-crafted bricks.

The world's most expensive brick

The chocolate-grey, oblong bricks are stacked on a pallet and ready to be shipped off. They are usually sent across the Atlantic Ocean via container ship, but the American customer is happy to pay DKK 160,000 to have them flown to Long Island, where he is building a 1200-square metre holiday home. He has waited 28 weeks for his specially produced bricks, so now he is willing to pay the price to get them immediately.

Petersen Tegl produces the world's most expensive bricks, but cannot keep up with the demand for them.
Since 1791, Petersen Tegl has excavated clay and moulded bricks in Broager, in the Southern Jutland region of Denmark. With a cheese slicer and a wooden mould, they mould the stones into the precise shape and colour required by the customer. At DKK 40 per brick, the Kolumba brick is the most expensive in the world. For comparison, a standard brick costs between three and five Danish kroner.

The brick is sought-after by superstar architects around the world, and there are now buildings in South Korea, Canada, Kazakhstan and 37 other countries featuring the handmade brick. Petersen Tegl produces two million of these bricks each year, operating twenty-four hours a day on all lines. Even so, the company cannot produce enough to keep up with demand.

So the company has bought a disused brickworks, which they are rebuilding from scratch with new production lines. They will triple production of the 4.4-kilo brick within two years, enabling them to ship six million bricks a year. This will allow the company to reduce delivery time to eight weeks. 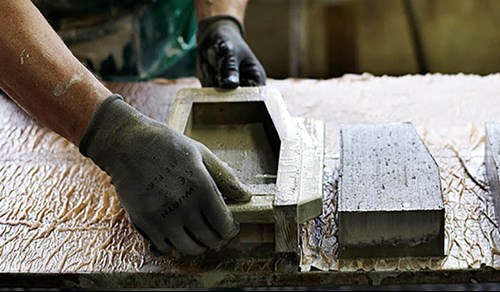 The juvel of Denmark is made of clay

The new brickworks requires an investment of DKK 75 million. The banks were keen to help, but felt things were moving almost too fast for the brickworks, and wanted to wait a couple of years.

Christian Petersen's response was, “This can't wait – it's happening now.” The solution was to get EKF to guarantee the loan for the new brickworks. Everyone was satisfied, and Petersen Tegl could buy the disused brickworks and build up production.

Look at the others we've helped

It can be expensive for a small company to achieve success with major international customers, be-cause large customers require long credit periods.
Case

Do you dare venturing out into the world? CEBRA architecture does

To take on the order, worth around DKK 70 million, CEBRA was required to provide the client in Abu Dhabi with a supply bond that exceeded the amount of equity in this relatively small design studio.
Case

With their proactive use of competitive financing from EKF, they are often one jump ahead when closing orders.
How a Capital Expenditure Guarantee works

Obtain credit from the bank to expand your company